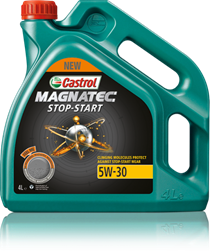 When driving in stop-start conditions, the engine speeds varies a lot, as you brake, stop, idle and start again, causing microscopic wear to the critical parts of the engine.

Also when idling, loads on critical engine parts can be up to 60% higher than at highway speeds, causing more damage.

Partnering with TomTom we found that the average driver can stop-and-start as many as 18,000 times a year which increases the wear on critical engine parts.

Castrol MAGNATEC’s Intelligent Molecules:
• Cling to engine parts when the oil drains down
• Form a self-healing layer to protect at each of the critical stages of stop-start driving and beyond
• Are proven to reduce wear in stop-start operation
• Deliver superior performance under extreme cold start up conditions

Please select some product options before adding this product to your cart.

You can find out more about which cookies we are using or switch them off in settings.

This website uses cookies so that we can provide you with the best user experience possible. Cookie information is stored in your browser and performs functions such as recognising you when you return to our website and helping our team to understand which sections of the website you find most interesting and useful.

Strictly Necessary Cookie should be enabled at all times so that we can save your preferences for cookie settings.

If you disable this cookie, we will not be able to save your preferences. This means that every time you visit this website you will need to enable or disable cookies again.