On 18 February 2021, after a seven-month journey from Cape Canaveral Air Force Base, Florida, NASA’s Mars 2020 Perseverance Rover successfully landed at Jezero Crater on the Red Planet. It has already travelled tens of millions of miles, but its journey is just beginning.

Equipped with precision instruments Mars Peseverance must be able to operate in Mars’ extreme environment, a planet where in summer it is 20°C at the equator and -153°C at the poles. Castrol specially developed Braycote greases and Brayco oils are vital in helping it to do this, holding their properties despite such dramatic temperature fluctuations to provide lubrication to its many scientific instruments, which include a weather station, ultraviolent spectrometer and laser micro imager.

The Perseverance mission isn’t our first journey with NASA; they’ve chosen our innovative lubricants for over 60 years, including many of the pioneering Apollo missions. In fact, it isn’t our first time on Mars; the NASA Curiosity Rover is also lubricated by Castrol. It landed on Mars in 2012 and is still up there, performing many years later.

LIQUID ENGINEERING THAT’S OUT OF THIS WORLD

Our innovative clean technology helps the mechanisms on Perseverance to perform to the high-level needed whilst roaming the vast surface of Mars. The unique properties of Castrol Braycote greases and Brayco oils mean they don’t produce any by-product, even under intense pressure. As a result there are no emmisions, which could potentially condense in the Rover and risk causing mechanical failure.

Amongst the astonishing wealth of NASA’s new technology that uses Castrols products –  is Ingenuity. This small, autonomous robotic helicopter was designed to test powered flight in the thin Martian atmosphere. It set an extraordinary world record on 19th April 2021 when it became the first craft to achieve powered, controlled flight on another planet.

AT THE HEART OF TECHNOLOGY

We’re proud of our decades working with NASA and the dreams of space travel that we’ve helped turn into a reality. A little closer to home we continue to play our part in industries as diverse as mining, shipping and automotive production while also powering cutting-edge transportation on land, sea and air.

AT THE HEART OF TECHNOLOGY

We’re proud of our decades working with NASA and the dreams of space travel that we’ve helped turn into a reality. A little closer to home we continue to play our part in industries as diverse as mining, shipping and automotive production while also powering cutting-edge transportation on land, sea and air.

Not only have we been involved with every land speed record in history, but we also now provide advanced e-fluids for Formula E racing, helping these futuristic cars to race around the world. Our innovative lubricants are used in the equipment onboard the RRS Sir David Attenborough, the UK’s most advanced polar exploration ship whose expeditions will be crucial in understanding climate change. In the skies, we’ve been making the impossible possible all the way back to the Wright Brothers, who in 1903 successfully invented and flew the first powered aircraft. It’s surely no surprise that the first plane ever to loop-the-loop had Castrol pumping through its engine. 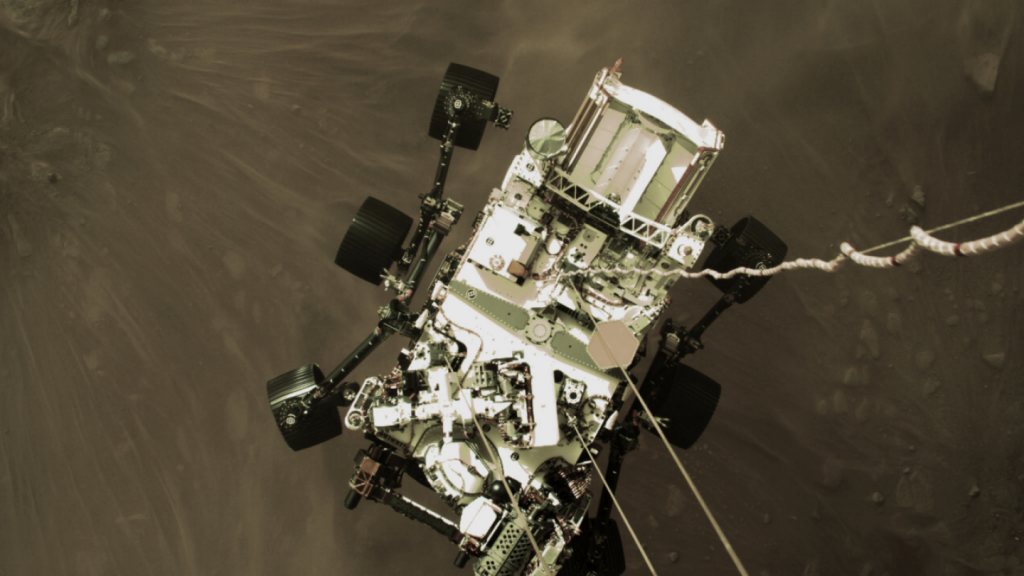 So, whether it’s helping to explore new worlds in outer space or pushing the boundaries on every surface of the earth, we perform a critical role in developing cutting-edge technology which drives us forward.

The Mars Peseverance Rover is the largest, heaviest and most sophisticated of the two Rovers which NASA has sent to Mars. It’s scheduled to work for at least one Mars year (about 687 Earth days). Perseverance is searching for signs of ancient microbial life, characterising the planet’s geology and climate and collecting rock and sediment samples for a possible return to Earth.

This website uses cookies to improve your experience while you navigate through the website. Out of these cookies, the cookies that are categorized as necessary are stored on your browser as they are essential for the working of basic functionalities of the website. We also use third-party cookies that help us analyze and understand how you use this website. These cookies will be stored in your browser only with your consent. You also have the option to opt-out of these cookies. But opting out of some of these cookies may have an effect on your browsing experience.
Necessary Always Enabled
Necessary cookies are absolutely essential for the website to function properly. This category only includes cookies that ensures basic functionalities and security features of the website. These cookies do not store any personal information.
Non Necessary
Any cookies that may not be particularly necessary for the website to function and is used specifically to collect user personal data via analytics, ads, other embedded contents are termed as non-necessary cookies. It is mandatory to procure user consent prior to running these cookies on your website.
Analytics
Analytical cookies are used to understand how visitors interact with the website. These cookies help provide information on metrics the number of visitors, bounce rate, traffic source, etc.
Uncategorized
Undefined cookies are those that are being analyzed and have not been classified into a category as yet.
Save & Accept